Back To All Posts

Building science case studies have shown Maine home builders the importance of building structures which limit air infiltration and properly manage moisture. This entails sealing the building envelope to prevent unconditioned air and moisture from entering the wall system from the exterior, while at the same time limiting moisture from the interior from entering the wall structure while allowing any moisture that is in the wall system to dry to the interior. There are a number of options to achieve these goals, however, we believe the following method is a very good choice to achieve excellent performance while at the same time controlling costs. 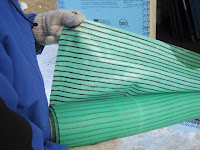 Behind exterior siding, we will install Greenguard “Raindrop” house wrap. Raindrop is a unique woven house wrap with vertical drainage channels which creates an effective air barrier and drainage plane. Any wind or solar-driven moisture that finds its way behind the siding will be channeled to the bottom of the wall assembly where it can drain to the outside. This drainage plane allows air circulation behind the siding so that it will dry and not be prone to moisture-related problems.

We are also using DOW SIS Structural Insulated Sheathing on this project. This product replaces OSB or plywood sheathing and is wall sheathing, foam insulation, and weather barrier in one product. 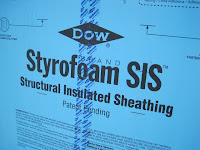 DOW recommends taping all sheathing seams or installing house wrap. We think that it is a good idea to do both.

The Raindrop house wrap we are using will provide a drainage plane as previously discussed, and for a couple of hundred dollars of DOW “Weathermate” tape (which is very good tape!) and a little time, it makes no sense to not tape all sheathing seams as well to further reduce the possibility of air infiltration. 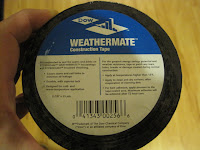 We will also caulk extensively to further seal against air infiltration from the inside of the wall system (more on this in an upcoming entry).

These measures will help to ensure that air infiltration is kept to a minimum. A blower door test will be performed to reveal any air leaks that should be sealed prior to closing in the wall cavities.

We will be using Certainteed “OPTIMA” blown in blanket insulation for this project (which I will discuss in greater detail in a future entry). This blown in product effectively fills all voids and gaps and maintains full contact with all (6) sides of the wall cavity reducing the possibility of convection as recommended by the Energy Star thermal bypass guidelines(in other words, the house will not be drafty).

Our walls will achieve R values of R-28.5 (Optima = R-23 + SIS = R-5.5). That is a respectable R-value, however, perhaps more important than the wall R-value is the reduction of thermal bridging accomplished through the advanced framing techniques employed (discussed in a previous entry) and the continuous thermal break achieved with the DOW SIS insulated sheathing.

In our heating climate, it is important that moisture (as vapor) inside the building envelope dry to the inside rather than pass through the wall cavity and condense on the cold surfaces within the wall assembly (typically the sheathing) wetting the wall assembly causing damage and creating an environment for mildew and mold growth.

The SIS insulated sheathing makes that scenario much less likely as the temperature within the wall cavity will not be as cold as if non-insulated sheathing were used, however, we will utilize a latex primer on the drywall surfaces which will act as an effective vapor retarder (not barrier) to limit moisture vapor from entering the wall system, while at the same time allowing any moisture in the wall system to ultimately dry to the interior.

In our next entry, we will discuss in detail sealing the building envelope to minimize heat loss and air infiltration. Read more here.

Get started with your new Maine home.